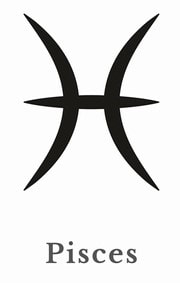 Pisces is a mutable, negative, water sign, ruled by the planet Neptune. Its symbol is two fishes swimming in opposite directions. The feet and lymphatic system are the parts of the body assigned to it. Its metal is tin, and its colour is sea green.

Some consider that with Pisces we have reached the highest point of yoga or spiritual consciousness. It’s a sign that is associated with the intangible, the spiritual, and the psychic. It's the most fluid of all the signs, with the water of Pisces being the water of the sea, infinitely deep and boundless.

The Sanskrit name for the constellation of Pisces was Mina, which means fish. Traditionally fish were sacred to the Moon-goddess, and the glyph of Pisces represents two crescent moons: one waxing and one waning. Originally the glyph meant the waxing and waning of each life in cycles defined by the moon. The glyph is sometimes interpreted as two fishes pulling in opposite directions; one representing the physical side of our nature, and one representing the spiritual side. In yoga terms this would be the tension between prakriti (matter) and purusha (spirit). I prefer to see the thread that joins the two fishes as an umbilical cord that nourishes both spirit and matter, rather than the two working against each other.

​The Pisces glyph was my inspiration for the Pisces-inspired yoga practice in the Yoga by the Stars book. The glyph encapsulates that just-before moment: the moment just before a flower opens, just before the new moon is visible in the sky, just before sunrise, just before a baby opens its eyes and sees daylight for the first time. The glyph’s waxing and waning moon represents the cyclical nature of life, where every ending is a new beginning. In the Pisces yoga practice, this led me to focus on the cycle of the breath, noticing where each part of the breath begins and ends; as well as observing the spaces between where one breath ends and the next breath begins. This focus gives a deeply meditative quality to the practice, which is relaxing and energising, grounding and elevating. It promotes stability, resilience, and an ability to flow with the ebb and flow of life.

In the Pisces-inspired yoga practice we also focus on the feet, because they are the part of the body assigned to Pisces. All over India the footprints of the Buddha are worshipped at holy shrines. In ancient times there were stones dedicated to Isis and Venus marked with footprints, meaning “I have been here”. Ancient peoples considered it essential to step on sacred ground with bare feet in order to absorb the holy influences. Dedicating a yoga practice to focusing on the feet is always fruitful and can incorporate elements such as: grounding, alignment, rootedness, connection to the earth, the pull of gravity, and finding support from the earth beneath our feet. 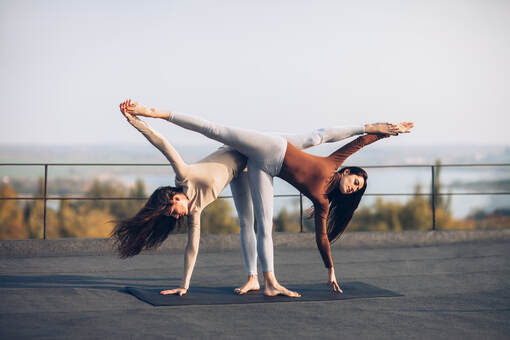 ​A full set of Pisces-inspired meditation questions can be found in the Yoga by the Stars book. In the Pisces chapter of the book you will also find The Simply Being Deep Relaxation.

Pisces: Dive deep to find self-knowledge. Peep behind the veil of the subconscious, free yourself from hidden influences and unwelcome gravitational pulls. Become the Sun at the centre of your own life. Attune yourself to the circular flow of life and learn to welcome light and dark, waxing and waning, and come face to face with love.